We are a chamber orchestra based in Queens, New York. We deliver affordable high-quality classical music performances to every community in Queens. We advocate new music written by contemporary New York composers.

Lucidity Chamberistas was formed by Eugene Takahashi in the fall of 2014 in Queens, New York with selected professional musicians. The word “lucidity” in our name is a play on the sound of Long Island City, where the orchestra had its inaugural performance. The inaugural performance was aired on the WQXR.

Our goal is to deliver live classical music to wider audiences in Queens and beyond. Our orchestra is small enough to allow us to perform in more intimate venues where a regular sized orchestra cannot be housed. We have made possible to present concerts in communities where orchestras had never been heard. 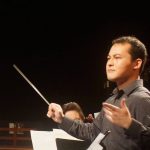 Conductor, violinist, Eugene Takahashi has been leading Lucidity Chamberistas as Founder and Director since 2014. He studied conducting at Aaron Copland School of Music, and Pierre Monteux School as Bernard Osher Scholar. His mentors include Tong Chen, Michael Jinbo, Maurice Peress, and George Rothman. His other conducting engagement includes Conductor of Advanced Ensemble of Northeast String Orchestra in 2015-16 season.